When Matt Beamish from ULAS first contacted me to say that they’d found a bark shield, at Enderby, near Leicester, I must admit to being more than a little sceptical. However, as Matt had said, it certainly is a bark shield that’s now been radiocarbon dated to the Middle Iron Age. Although we can’t be certain it’s probably made from alder or willow bark and has a red chequerboard decoration and a beautiful woven boss. It’s not just unusual, as far as we can tell, it’s unique in European Prehistory.

Details of the research can be found here, along with the names of the pretty large team from the Universities of York and Leicester and York Archaeological Trust that’s been assembled to investigate this object.

Probably the biggest surprise of all was undertaking the initial experimental work with a team put together by Matt, including the wonderful Diederik Pomstra. At the outset, we didn’t think that a bark shield would be up to much. Turns out we were wrong – as the alder bark we were using for our replica dried, it became surprisingly stiff and tough – strong enough to stop the arrows we introduced it to. Although this shield probably wouldn’t have been as strong as a metal or wooden example, it is incredibly light. We’ve got more research to do before we publish, looking into the potential spear and sword marks that have been identified on the shield (!). In the meantime, the artefact is being moved to the British Museum, where it will eventually go on display. Huge thanks are due to the developer, Everards Brewery.

The shield, post conservation by the team at YAT 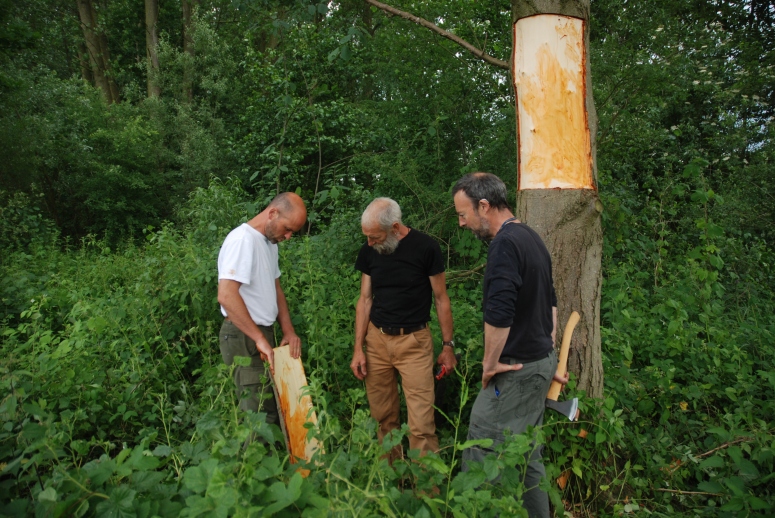 Harvesting bark for the experimental work